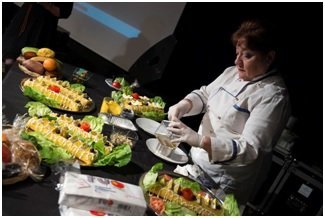 Elsa Javier Piacentini is a chef and former philosophy professor from Peru who was the owner of the highly acclaimed Peruvian restaurant “La Limena” in Rome for four years (2005-2009) and who now manages with her Italian husband a catering service called Luelpi. Elsa arrived in Rome to treat a serious health problem and found herself in a precarious economic situation, so she started working as a career for the elderly in order to save money for her treatment. After a while, she met and married her husband and together they thought and realized the dream of a Peruvian culinary experience in Rome and they opened their catering service Luelpi and their restaurant La Limena, which had been won many awards, with one of the most prestigious being “Premio Las Américas” (2009).